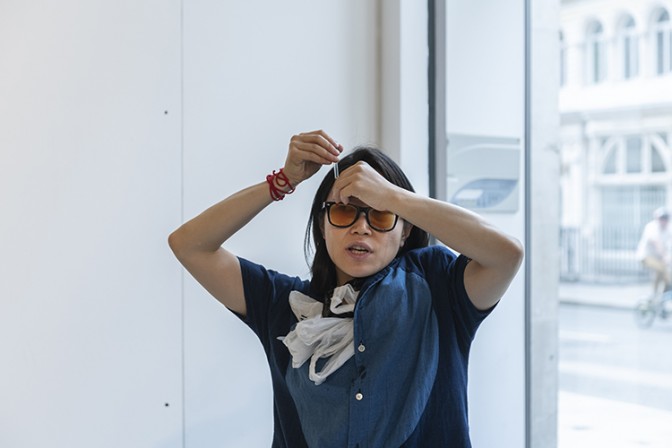 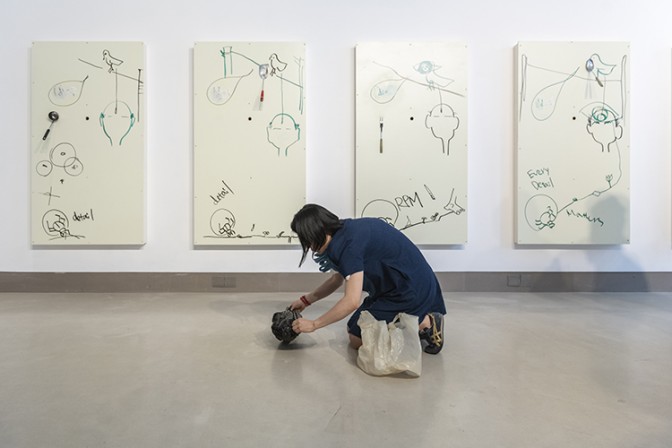 White Rainbow is delighted to present Clothes Line – a solo exhibition of drawings and films of performances by Aki Sasamoto (b. 1980, Kanagawa, Japan). This is the artist’s first presentation at a UK gallery.

Based in New York, Sasamoto works in performance, sculpture, dance, and whatever other media required to get her ideas across. Sasamoto’s performance/installation works revolve around gestures on everything and nothing. Her installations are careful arrangements of sculpturally altered found objects, and the decisive gestures in her improvisational performances create feedback, responding to sound, objects, and moving bodies. The constructed stories seem personal at first, yet oddly open to variant degrees of access, relation, and reflection.

At White Rainbow, Sasamoto presents a selection of drawings realised during three of her major performance installations to date. These are: Wrong Happy Hour, JTT, New York (2014); Yield Point, The Kitchen, New York (2017), and Delicate Cycle, SculptureCenter, New York (2016). While all originating in New York, where the artist lives and works, iterations of these projects subsequently travelled to art institutions in Japan and Brazil, among others, where Sasamoto also realised performances and drawings. During her performances, Sasamoto draws on whatever she has to hand. These works, referred to by the artist as diagrams, are almost akin to musical notations or a score – a way of getting her ideas down while thinking aloud. Typically, during the course of an exhibition by Sasamoto, she will stage a number of performances, realising a drawing each time, which then will go on to form part of the installation. While similar, the drawings contain the particularities of each performance. As physical objects, they outlast the performance or installation of which they become part.

Sasamoto also delivers a performance at White Rainbow, and in so doing, creates a new diagram. For Sasamoto, the confessional, cathartic nature of delivering these performances lends each diagram a distinct emotional resonance. White Rainbow stages the first exhibition solely of Sasamoto’s diagrams, focusing on a key aspect of her performance practice.

As an artist, Sasamoto follows her nose, and her research and artistic interests can lead her down any number of paths. Whether stemming from research into fetish wear, dung beetles, or observing the latent romanticism of strangers drinking at a bar during happy hour, Sasamoto’s performances and installations draw from her direct life experiences, and just as life can throw up unexpected encounters, so too her work is open to chance happenings or surprising relationships. Crucially, the installation aspect of Sasamoto’s work sees these encounters and thought processes reflected materially, both sculpturally and in her use of found objects.

Aki Sasamoto (b. 1980, Kanagawa, Japan) is a New York-based Japanese artist who works in performance, sculpture, dance, and whatever other mediums it takes to get her ideas across. Sasamoto’s performance/installation works revolve around gestures on nothing and everything.  Her installations are careful arrangements of sculpturally altered found objects, and the decisive gestures in her improvisational performances create feedback, responding to sound, objects, and moving bodies.  The constructed stories seem personal at first, yet oddly open to variant degrees of access, relation, and reflection.

Her works have been shown both in performing art and visual art venues in New York and abroad. Besides her own works, she has collaborated with musicians, choreographers, scientists and scholars, and she plays the multiple roles of dancer, sculptor, or director.